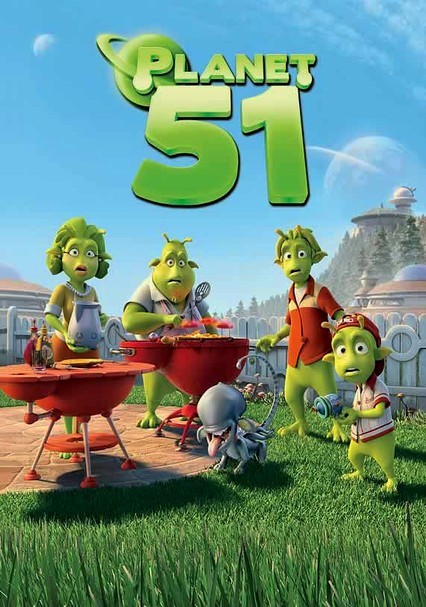 2009 PG 1h 31m Blu-ray / DVD
When astronaut Capt. Chuck Baker arrives on Planet 51 -- a world reminiscent of American suburbia circa 1950 -- he tries to recover his spaceship and make it home safely with help from an empathetic little green being.

Parents need to know that this animated alien comedy earns its PG rating with a fair bit of sexualized humor -- including jokes about anal probing and penises which may go over younger kids' head (though middle schoolers won't be duped -- in fact, they'll probably find it hilarious). There's also some mostly mild violence -- though weapons are involved -- as the alien army attempts to capture and subdue a human astronaut (voiced by Dwayne "The Rock" Johnson), as well as references to a maniacal doctor's desire to suck out Chuck's brain for scientific reasons. The language is mostly tame ("moron" and "stupid"), if disrespectful; beyond the sometimes-crude jokes, the sexuality revolves around one character's infatuation with another, which culminates in a kiss. Despite taking place on another planet, there are a few brands featured in the movie, including Volkswagen, Twix, and iPods.

"Parking" aliens talk about how it's their first time "parking" (i.e. kissing in car). Two alien adolescents flirt with each other and eventually kiss. A female alien with robust cleavage gets angry at a male alien who's staring at her. A character makes repeated references to alien "probes" and how to discourage them. The astronaut tries to teach an alien how to romance "chicks." After seeing the astronaut naked (he drops his towel for a second, but the audience doesn't see anything), an alien jokes "that's a funny place for an antenna."

An alien general and soldiers try to take down the American astronaut with military weapons and guns. An alien doctor is after Chuck's brain -- for scientific reasons, of course...

Mild language includes "what the...," "moron," and "stupid." There's also crass humor that includes commentary about "chicks," "alien probes," and a penis joke (the alien thinks it's an "antenna").

Much of the positive stuff is secondary to the suggestive humor, but Lem and his friends do work together to help Chuck, and Chuck learns to trust the aliens, despite his initial hesitation.

Twix candy bars, Sea Monkeys, and Volkswagen are recognizable/discussed brands. There's also an iPod-looking device and many obvious references to other movies.