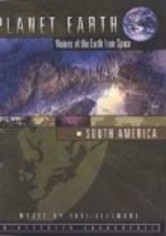 2004 NR 1h 10m DVD
Take a tour of beautiful South America without ever leaving your couch. As it hovers high above the Earth, the Space Shuttle records stunning images of the planet's environment, including more than an hour's worth of spectacular footage of the South American continent. Enhancing the visuals is a soundtrack of traditional South American music.