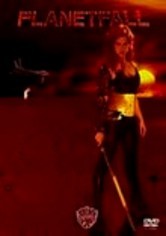 2005 NR 1h 30m DVD
It's a space race to the death as two female bounty hunters battle it out over a shipment of precious cargo in this sci-fi tale. When a spaceship filled with a powerful mind-reading drug crashes on a remote planet, two futuristic femme fatales compete for the treasure as martial law is declared. Heidi Fellner, Leitha Matz, Bill Borea, Elijah Drenner, Charles Hubbell and Troy Antoine LaFaye co-star in this spaghetti Western-flavored adventure.