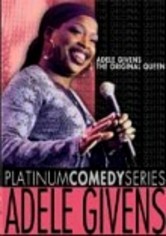 2004 NR 1h 0m DVD
Those who have seen Adele Givens's comedy act can attest to the fact that she's just as hilarious as any man on the comedy circuit today. This hysterical and often raunchy stand-up comedy performance showcases Givens's comedic chops with her uproarious take on current events, relationships and the government. Delivering a riotous, no-holds-barred show, Givens leaves no stone unturned with her brazen and witty style.