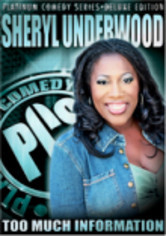 2004 NR 1h 30m DVD
In-your-face stand-up comedian Sheryl Underwood serves up her special brand of sharp and sassy life observations in this hilarious live performance. A comedy queen with a talent for skewering topics such as dating, college life and the military, Underwood has hosted a radio show and appeared on "Def Comedy Jam," I Got The Hook Up, Beauty Shop and Bulworth. She also hosts the 2005-06 season of BET's smash hit "Comic View."