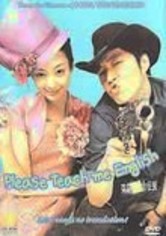 2003 NR 1h 58m DVD
Forced to learn English for her job, a public official named Yeong-ju Na (Na-yeong Lee) enters a quirky ESL classroom where Moon-su Park (Hyuk Jang) -- a student with ridiculous sideburns who's renamed himself Elvis -- shakes up her world. Eventually, Ju discovers the truth about why he's trying to learn English: to help his non-English-speaking mother communicate with his long-lost adopted sister.