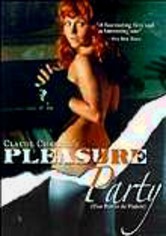 1975 NR 1h 45m DVD
Director Claude Chabrol cast his screenwriter friend Paul Gegauff (and Gegauff's family) in this semi-autobiographical story about the destruction of a family at the hands of an egomaniac. Paul and Esther seem to have an idyllic marriage, unhampered by conventional stress (they even sleep with other people). But the status quo changes when Paul reacts violently after Esther sleeps with Habib, a guest at one of the couple's free-for-all parties.