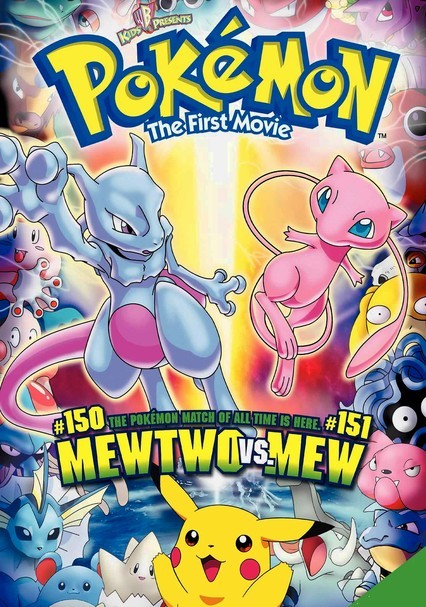 1999 G 1h 36m DVD
A great war is brewing: Ash Ketchum and fellow Pokemon trainers Misty and Brock continue their quest to become the greatest Pokemon masters of all time. Joined by Pikachu, they're lured into a massive battle that will require all their courage and skill. Are they equal to the challenge? Children everywhere will cheer the good guys in this well-loved favorite.

Parents need to know that Pokemon: The First Movie is almost nonstop cartoon action from start to finish, and is not a good choice for kids too young to understand the difference between real and pretend violence. Dark, suspenseful music accompanies many scenes with explosions, storms, fire, falls, hand-to-hand combat, and what may be the deaths of important characters. Yet the film does contain some plainspoken messages about how destructive it is to fight, about slavery, and how "life is a great miracle and a great mystery." Because all of the Pokemon and their trainers in this film are tied to games, trading cards, action figures, and more, this first full-length movie appears to have two purposes: to entertain and to serve as a marketing tool.

Continuous cartoon violence. A laboratory is destroyed by explosion and fire as the screams of those trapped inside are heard. In addition to vicious one-on-one struggles, fire, explosives, laser beams, and electrocution are used as weapons in various battles. The villain uses his psychic power to thrown characters from great heights, smash them into walls, knock them down, and capture them. Great windstorms and rainstorms with raging waters threaten the Pokemon team. For several minutes the central human hero is thought to be dead.

Several humanizing messages are interspersed with cartoon battles and the overarching threat of the planet's destruction: Fighting to the death is a fight no one can win; the real strength of the Pokemon (and others) comes from the heart; it's not your origins that count, but what you do with your life that determines who you are; and would-be enemies should focus on what they have in common rather than on their differences.