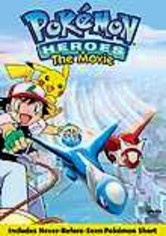 2003 G 1h 11m DVD
Ash and his friends visit Alto Mare, the "water capital" of the world, to meet up with Latias and Latios, a Pokemon brother-and-sister pair. There, they guard the Droplet of the Heart, a treasure that is wanted by the thieving Zanna and Rion.

Parents need to know that Pokemon Heroes, the fifth film in the Pokemon series, stays true to the franchise's focus on cartoon action. There are lots of battles, many characters in danger from one-dimensional villains and their weapons, and the ongoing threat of a beautiful, peaceful city's destruction. No one is seriously injured, but some characters are knocked out for a time, and one central legendary "guardian" vanishes, supposedly giving his life to save his city -- it's never spoken of as a death, but as if he is now in some other, better place. Positive messages about fulfilling dreams and destiny, as well as the ever-present "good triumphs over evil," get some attention and frame the almost nonstop physical conflict.

Waves and/or funnels of water crash and threaten the beautiful city of Altomare more than once. Characters are submerged, struggle, but finally escape the raging waters. Two sea creature-guardians (Latios and Latias) are in jeopardy for much of the film; their screeches are piercing. The frequent cartoon action includes: thunderbolts, chases, force fields, falls, and electric shocks. "The Defense Mechanism of Altomare," described as the most powerful weapon ever built, subdues its victims, goes out of control, and threatens everyone. Evil-looking fossils appear and wreak havoc on the humans, the Pokemon, and most terribly on Latias and Latios, the guardians of the city.

An opening song encourages everyone to fulfill their destinies. "Everyone has a dream that fills their hearts." Ash's dream is presented as his quest to become the world's greatest Pokemon master. As in all the Pokemon movies, villains are defeated by the forces of good.

The Pokemon films continue to be an effective marketing tool for all Pokemon products -- games, cards, toys, etc.