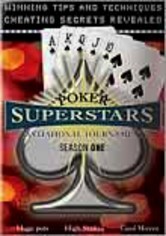 2005 NR 3 discs
Join the action and suspense as legendary poker pros battle rising superstars in this thrilling, no-limit Texas Hold'em championship, where the world's best cardplayers match wits and skill in one of the most exciting tournaments broadcast on television. The stakes are high, and the gambling is intense in this popular, fast-paced series that originally aired for 12 consecutive weeks on the Fox Sports Network.