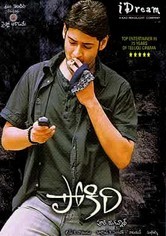 2006 NR 2h 44m DVD
Romantic sparks fly between Pandu (Mahesh Babu) and Shruti (Ileana), who have a knack for repeatedly running into each other. What Shruti doesn't know is that Pandu is a Mafia hit man. While he works overtime to conceal his true identity from her, he gets into even bigger trouble with his evil new boss, Ali Bhai (Prakash Raj). At the time of its release, this action hit was the highest-grossing Telugu-language film ever.