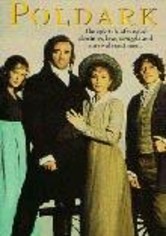 1996 NR 1h 45m DVD
At the dawn of the 19th century, as Britain faces a tangle of national, political, economic and military crises, Poldark family patriarch and member of Parliament Ross Poldark (John Bowe) joins the army to fight the war against France. Meanwhile, the old family feud with George Warleggan (Michael Attwell) threatens to rear its ugly head once again, and young Jeremy Poldark (Ioan Gruffudd) rescues a lad who lures the family into smuggling.