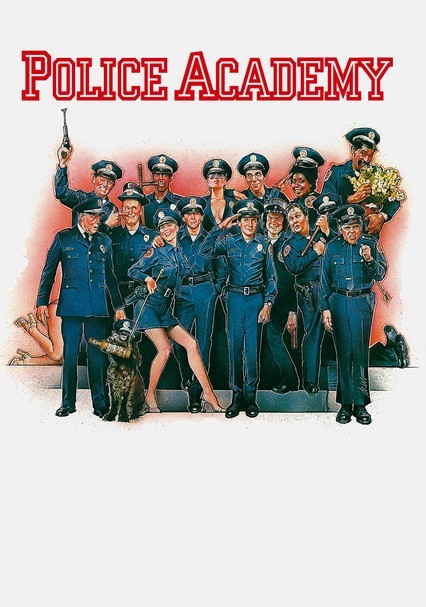 1984 R 1h 36m DVD
In a less-than-brilliant flight of fancy, the mayor decides the police academy will be open to all applicants. Of course, his decree opens the floodgates to a swarm of oddballs and sad sacks who have no business protecting and serving anything.

Parents need to know that Police Academy is a classic of '80s cop-spoof films but it is not for kids. The sophomoric humor is rooted in one-dimensional character stereotypes, and there is frequent profanity, as well as nudity, sex, and violence. Furthermore, unlike similar '80s movies like Airplane!, Meatballs, and Caddyshack, Police Academy's "so dumb it's funny" brand of comedy hasn't aged well. Parents looking to share with their kids the '80s movies of their youth are encouraged to look elsewhere.

Women are shown naked from the waist up while showering. A rear end is shown. A character asks another character if he and his wife "do it doggie style." Two scenes with strongly implied oral sex. Two characters are sent to a gay bar, where patrons dress in leather and force the characters to dance with them. A female character jumps on top of a male character in his room and removes her shirt, while demanding he have sex with her.

Lots of comic slapstick including fistfights, a motorcycle crash, falling headfirst into the backside of a horse. Verbal bullying. A riot breaks out. Rioters are shown looting, brandishing sticks. Gun play between members of the police academy and "the bad guys." Misfired guns throughout.

Frequent profanity: "crap," "d--khead," "s--t," "a--hole," "goddamn," "pissant," "numbnuts," "son of a bitch," and "f--k." One of the antagonists makes two racial slurs. Another antagonist makes a homophobic pun of another character's last name. Another character says that "sleeping is for fags."

While an argument could be made that the film has a message of "You can be anything you want to be if you put your mind to it," that message is easily lost in the maelstrom of stupid comedy.

Early in the film, a Kodak photo booth is featured prominently.