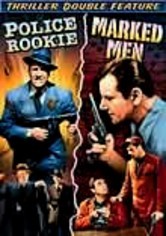 1940 NR 2h 17m DVD
Two honest men seek vengeance against the villains who ruined their lives in this gritty double feature. Rookie cop Steve Hannigan (Gordon Jones) investigates the murder of his police inspector father and finds out the killer is a dirty double-crosser in Police Rookie. In Marked Men, wrongly accused Bill Carver (Warren Hull) breaks out of prison, locates the gangsters who framed him and drives them into the desert to exact his revenge.