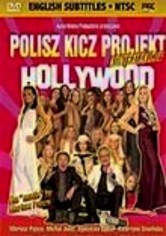 2006 NR 1h 28m DVD
This faux documentary is a sequel to the hilarious hit about two wannabe filmmakers out to make a buck or two. This time, they get the brilliant idea to make a horror film starring beautiful bombshells. The catch is, the actresses will have to pay to be a player in the film. The directors leave their humble dwelling in Poland and head off to Hollywood, where many a starving actress looking for their big break can be found.