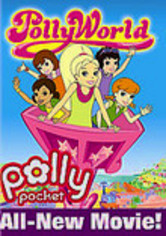 2006 NR 1h 8m DVD
Girl power rules as Mattel's spunky heroine moves from dollhouse to screen in her first animated adventure. With a little help from her friends, Polly can handle anything -- even her scheming soon-to-be stepmom. Neither mean "mom" nor a jealous classmate can spoil the fun for Polly and pals as they enter a reality show competition and take in the thrilling rides (and even more thrilling shopping) at a local amusement park.

Parents need to know that this movie will appeal to young girls who are Polly Pocket fans, and that they're likely to lengthen their gift wish lists with toy tie-ins after seeing it. A new stepmom is portrayed as scheming against her stepdaughter and the stepdaughter's beloved babysitter behind her fiance's back. Shopping and spa treatments are portrayed as almost sacred pursuits. Reality show contestants compete to win money to donate to a charity of their choice.

Characters have an innocent crush on a reality show host.

No cursing or vulgarity, but adherents to the English language will wince at the slang-heavy dialogue. "Chillax," "spectabulous," and "monster fabulorific" are among the most colorful invented words.

Mean girl obsessed with her own popularity will do anything to bring Polly down a notch, but is ultimately unsuccessful. Honest discussion of a character's feelings about her father's remarriage include supportive advice from close friends. Reality show participants compete to win money for a charity of their choice as part of a community service project for school. Most successful teams are the ones that help one another.

This is essentially a one-hour commercial for Polly Pocket toys. Almost every set change is in fact a playset that can be purchased, according to the helpful merchandise sheet enclosed with the video. The Popsicle brand is also featured prominently.