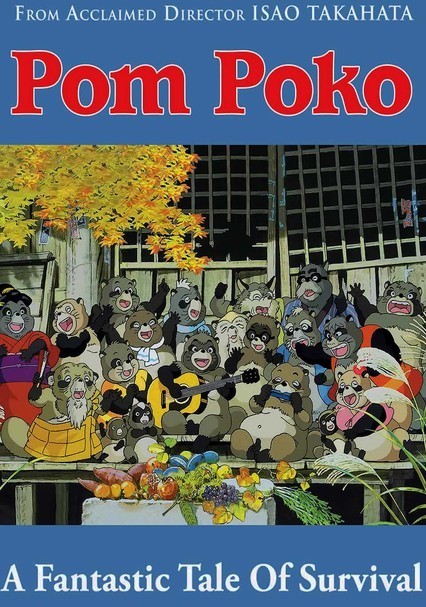 1994 PG 1h 59m DVD
The wild raccoon dogs of Tama Hills are being pushed out of their homes as shopping malls and housing developments spring up and take over the woods. But these very special animals -- that practice the art of transformation and can even become human -- have had enough and are preparing to fight back. With their magical powers, they manage to scare off the developers and buy some time. But for how long? Isao Takahata directs this animated feature.

Parents need to know that the heroes of Pom Poko, a Japanese anime film by Isao Takahata, one of the founders of the prestigious Studio Ghibli, are raccoons -- but raccoons that can transform into anything and everything, particularly humans. It's an environmentally themed story about human invasion of wildlife spaces. Lots of cartoon jeopardy and some scares accompany the intriguing critters as they try to stop urban sprawl. Colorful, fierce, and mythic monsters parade through scenes, and raccoons battle each other with sticks and fight their human enemies with elaborately destructive pranks. The raccoons are responsible for several human deaths and are themselves killed in great number (raccoons who have succumbed to starvation are seen stacked up; others are on-camera roadkill). Despite those issues and its nearly two-hour length, the film offers older kids and teens a unique experience that is funny, touching, informative, and even inspiring. Audiences will identify with the beleaguered little creatures. However, don't look for any sympathetic humans; in the Tama Hills outside of Tokyo, they don't appear to exist.

Springtime finds the raccoons with romance on their minds; they court, marry, and have offspring. The raccoons depicted are tanuki of Japanese legend; they are drawn with visible testicles.

Cartoon violence throughout. Alliances of raccoons fight one another with sticks, injuring many. When humans are recognized as the enemy, raccoons use multiple methods to try to stop destruction of their land. Vehicles are overturned, fires set, and bridges damaged; three human workers are killed in the process. One angry raccoon leader presses to "Kill all the humans" in several scenes. Raccoons, able to transform themselves into a variety of shapes and beings, become monsters (skeleton, dragon, teeth-bearing beasts) to scare the humans. Many raccoons die, either from starvation, road accidents, or traps. Narration describes the plight of the animals, while visuals show multiple dead raccoons.

Humans are frequently described as "cruel," "sick," "heartless," "mean." A raccoon encourages his peers to "Kill the humans!"

Strongly advocates for respecting nature as human civilization infringes upon wild animal habitats. Comments on the value of peaceful means to bringing about change as opposed to dependening on violence; different raccoon factions advocate differing points of view. To promote the rights of wild creatures, the raccoons are depicted with feelings, spirituality, and a capacity for love, friendship, and fun.

Raccoons engage in numerous celebrations; in some they consume drinks that appear to be alcohol. In one lengthy scene, two obviously inebriated men sit at a bar reacting to raccoon pranks going on behind them.