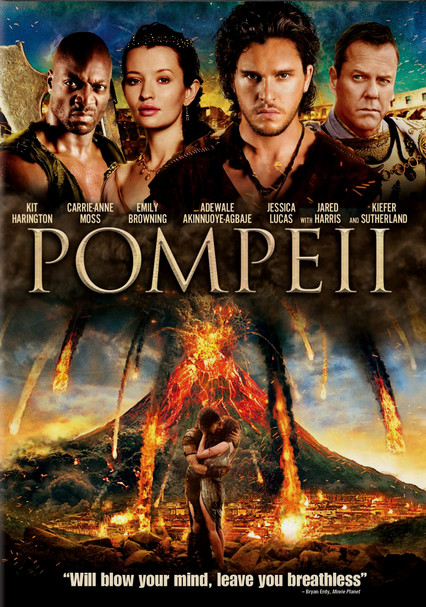 2014 PG-13 1h 45m Blu-ray / DVD
In the days leading up to the eruption of Mount Vesuvius, a slave on a ship headed for Naples is determined to get back home to save the woman he loves, as well as his best friend, who is a gladiator trapped in the city's coliseum.

Parents need to know that Pompeii is a gladiator tale set in the last days of the doomed Roman city, and is very heavy on combat and carnage. Gladiators fight to the death, soldiers massacre villagers, prisoners batter each other over petty slights, and numerous scenes end with piles of corpses in the background. There's hardly any swearing, sex, or drinking to interrupt the fight scenes, just lots and lots of death.

A few suggestive comments as a woman examines a man. One scene shows a couple kissing passionately.

It's a gladiator film, so there's near non-stop violence. Men use swords, spears, knives, and other weapons to kill, stab, and pummel each other. Sometimes they batter people with their bare hands. There are piles of corpses left at the end of several scenes, though few of the deaths are gory. A massive volcanic eruption destroys a city and kills most of its residents in extensive, explosive scenes. Some scenes show ash-covered corpses after a volcanic eruption.

One character calls a woman a "bitch," once.

Facing death is easier when your friends and loved one are beside you. Also, stand up for what you believe in.