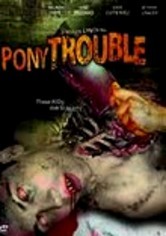 2005 TV-MA 1h 35m DVD
When the Megatoy Corp. dispatches a film crew to observe fans at play with the company's latest product, a role-playing fantasy called the Pony Game, they unwittingly set the stage for an all-out war. With a group of drug-abusing, rivalry-riddled, oversexed friends as their subjects, somebody's gonna get hurt. Directed by Warren Lynch, this campy independent horror film stars Melinda Desiree Frye, Irina Peligrad and Eddie Gutierrez.