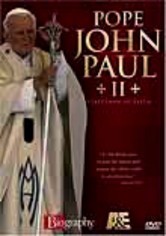 1997 NR 0h 50m DVD
As spiritual leader of the Church for more than 25 years, Pope John Paul II served as an inspiration to millions of Catholics worldwide. This moving tribute traces the remarkable life of Karol Jozef Wojtyla, from his childhood in Poland to his rise as a cardinal under communism to his ascendancy to the papacy. Harry Smith hosts this memorial to the man who stood as a champion of human rights and became a powerful symbol of peace and faith.