Popeye: Hits and Missiles and Other Fun Fan Favorites 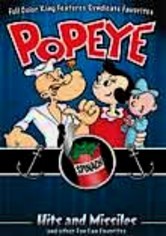 Popeye: Hits and Missiles and Other Fun Fan Favorites

2004 NR 2h 40m DVD
Popeye, that sailorman who never met a can of spinach he didn't like, has enjoyed fame as a star of film, television and newspaper cartoon strips since the late 1920s. Along with Olive Oyl, Bluto and J. Reginald Wimpy, the muscle-bound sea-farin' swabbie has made the world brighter for millions of fans. This video includes 20 cartoons such as "Gem Jam," "Insultin' the Sultan," "Egypt Us" and many others.