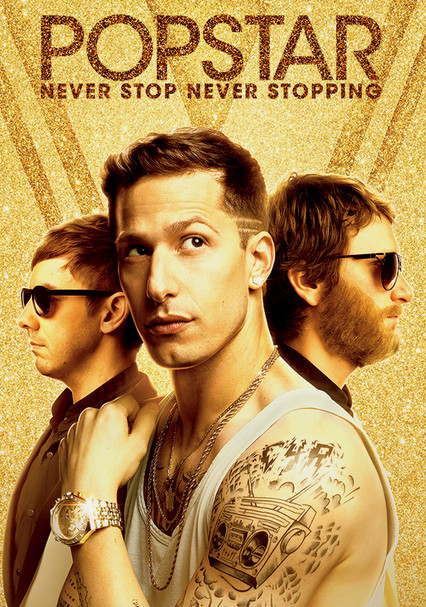 Parents need to know that Popstar: Never Stop Never Stopping is a fresh, fun -- and very racy -- musical mockumentary from Saturday Night Live veterans Andy Samberg, Akiva Schaffer, and Jorma Taccone (collectively known as The Lonely Island, a group that has tons of teen appeal). Lots of other SNL alums pop up, too, and there are plenty of celebrity cameos -- as well as lots of sexual innuendo and both partial (bare breasts) and full-frontal nudity (a man exposes his penis to be autographed). The lyrics of the featured songs almost always deal with sex, drugs, and/or violence, and there are some scuffles and other moments of danger played for laughs. Expect frequent swearing (including "f--k," "s--t," and more) and plenty of drinking and pot smoking, as well as a scene of characters doing cocaine.

Female fans flash their bare breasts at a famous musician; in one scene, a man exposes his penis to be autographed. Some song lyrics include graphic sexual content/references. Lots of innuendo. Brief discussions of sex acts.

Estranged friends scuffle; one character mouths off, screams nasty things on stage, and generally seems unstable. Men slap each other, and one punches another in the crotch. Graphic song lyrics describe how Osama Bin Laden was killed. Pop star Seal is shown being attacked by wolves, along with other bystanders, and shots are fired. Men scuffle and use a flamethrower to fend off a violent bee attack.

Amid the over-the-top content is the message that when your professional and personal life take hits, you should keep one foot moving in front of the other. (Or dancing.) Also, true friendship is irreplaceable and can't be bought.

Conner is shown driving a Mercedes and a Lamborghini. Plenty of other brand names/products make appearances, too, including Yelp, Apple, US Weekly, YouTube, Pitchfork, Rolling Stone, the Onion, and Entertainment Tonight.

Many scenes show people in various stages of inebriation, including one sequence in which characters do shots. One scene shows a middle-aged mom doing cocaine with her grown son and his friends, and many segments have people smoking pot.