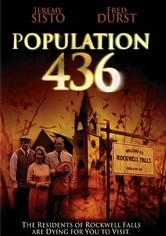 2006 R 1h 32m DVD
For a century, Rockwell Falls has had the same number of residents: 436. A census taker (Jeremy Sisto) is sent there to figure out how the town managed to accomplish such a dubious feat in this disturbing drama. Once he arrives, he quickly senses all's not well and is subsequently stripped of his freedom. If he doesn't fall in line with the village's oppressive rules, he may end up lost forever. David Ames and Fred Durst co-star.