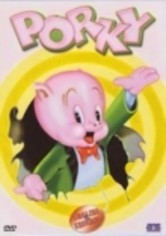 2005 NR 1h 0m DVD
Initially created to team with a cat named Beans, Porky Pig found his niche as Warner Brothers' straight man, serving as the character audiences could always identify with and delivering his trademark "That's all, folks!" This collection of classic cartoons pushes the shy and stuttering swine (first voiced by actual stutterer Joe Dougherty and later by Mel Blanc) to the center of the action, showing off some of his most memorable work.