Portrait of Courage: The Untold Story of Flight 93 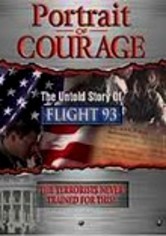 Portrait of Courage: The Untold Story of Flight 93

2006 NR 2h 0m DVD
On Sept. 11, 2001, terrorists hijacked four planes, but one failed to hit its intended target: United Airlines Flight 93, which crashed in a Pennsylvania field after passengers stormed the cockpit. This film is a tribute to the heroes of Flight 93. A group of seemingly ordinary people displayed extraordinary courage and selflessness that fateful day by taking matters into their own hands and refusing to knuckle under to terrorism.