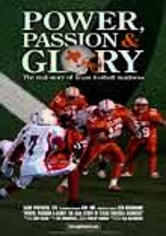 2004 NR 1h 30m DVD
You may have seen the hit sports movie Friday Night Lights; now, witness the real thing! Lensed by Ken Heckmann and narrated by Pat Summerall, this scintillating documentary captures the grit, tension and hysteria of "Texas high school football madness." The focus here, appropriately, is the Celina Bobcats, who became the winningest team in Texas history during their 2002 season -- all of which Heckmann captured on camera.