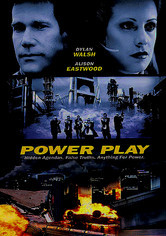 2002 R 1h 40m DVD
Earthquakes are rocking Southern California, and journalist Matt Nash (Dylan Walsh), who's been investigating the energy crisis that's plagued the state, begins to see a connection between his story and the seemingly "natural" disaster the area's been trying to survive. Could the earthquakes be caused by corruption at the highest level? Before he knows it, Nash finds himself in a fight for his life as he seeks to print the truth.