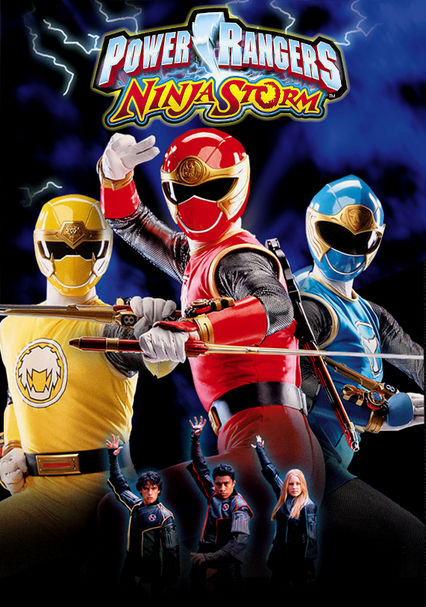 2003 TV-Y7-FV 1 season
When the elite warriors from the Wind Ninja Academy are captured by the evil Lothor, sensei Watanabe gives Wind Morphers to Shane, Tori and Waldo so they can become Wind Power Rangers and wage an all-out war against evil.

This installment in the Power Rangers franchise takes flight when power-hungry Lothor kidnaps a group of ninja students. To stop Lothor, Sensei Watanabe transforms the remaining students -- Shane, Tori and Dustin -- into full-fledged Wind Rangers. Armed with their own Zords, the three justice-seekers battle Lothor and his goons with help from Thunder Rangers Hunter and Blake as well as Sensei Watanabe's son, Cam.

Parents need to know that Power Rangers Ninja Storm is a fast-paced and pretty violent live action series about cartoonish superheroes battling the forces of evil. During stagy battles with no gore, combatants kick, choke, and shoot each other with bolts of lightning and sparks, crush each other with objects, throw each other high into the sky. The Power Rangers can shoot electricity from their hands and use stylized guns to shoot enemies. There are several battle scenes in each episode, often with anonymous ninjas dressed in identical costumes. That said, the show boasts great ethnic diversity and one female Power Ranger, though other females are often quite stereotyped as bratty "mean girls," with sexed-up costumes to match.

Female Ranger Tori has a crush on another Ranger, which is eventually reciprocated, with some onscreen kissing. She also wears a skirt while her male counterparts wear pants. Female villains sometimes wear slightly sexy outfits.

Heavy, nonstop cartoonish violence. Many staged martial arts battles in each show. The Power Rangers shoot bolts of electricity from their hands or from stylized guns, which can cause enemies to explode into pieces (no blood or gore is shown).

Some insults, particularly from bad guys and gals: "Stupid!" "You want a piece of me? Well, bring it on!"

The Power Rangers are always on the side of good and protecting the earth and its people. However, their work is accomplished through force and cartoonish battles, so it's not very applicable to day-to-day life.

Ninja Storm is just one in a line of more than a dozen Power Ranger adaptations. If kids enjoy Ninja Storm, they may want to see others, or buy the many Power Ranger toys.