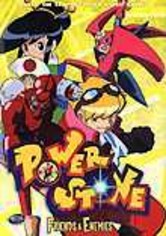 1999 NR 1h 40m DVD
The stars of the popular Capcom fighting game come to life in this exciting anime series. Join Edward Falcon (who can transform into a rocket-powered robot warrior!) and his comrades -- fortune-teller Rouge, samurai Ryoma and ninja Ayame -- as they search for Falcon's father and the Mighty Power Stones. In this volume, saves Dulustown from attack, has another run-in with a pirate in Aqua Land and meets the mysterious Valgas. Episodes 18-21.