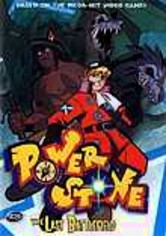 1999 NR 2h 5m DVD
The stars of the popular Capcom fighting game come to life in this exciting anime series. Join Edward Falcon (who can transform into a rocket-powered robot warrior!) and his comrades -- fortune-teller Rouge, samurai Ryoma and ninja Ayame -- as they search for Falcon's father and the Mighty Power Stones. As the series concludes, Falcon discovers his enemies' terrible secret before a final confrontation in Dark Land. Episodes 22-26.