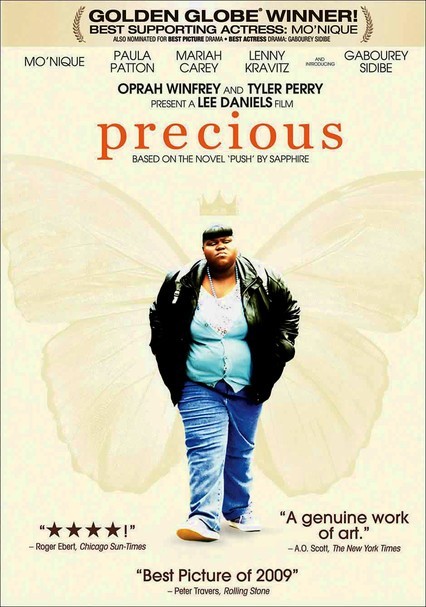 2009 R 1h 49m Blu-ray / DVD
Visciously abused by her mother and impregnated by her father, Harlem teen Precious has an unexpected chance at a different life when she enrolls in an alternative school, but she still must battle unimaginable barriers at every step of the way.

Parents need to know that this powerful indie drama based on the novel Push by Sapphire is a harsh, raw depiction of a Harlem teen's brutal life that may be too intense for many viewers, even older teens. The main character is abused in every way imaginable (emotionally, physically, sexually) by those who ought to have her best interests at heart (including her parents) -- and yet she persists, rising above her circumstances. The language is coarse throughout the movie, there are many scenes of household violence (slapping, kicking, pushing, etc.), and sexual abuse abounds (a man is shown unbuckling his belt before he rapes his daughter). Still, it's ultimately a compelling, thought-provoking film that will stick with those mature enough to handle it.

Except for some dream sequences in which teens flirt with each other, all depictions of sex are either overtly or more subtly associated with violence (including assault). A woman is seen under the covers moaning, presumably pleasuring herself.

Overwhelmingly cruel at times, with a father molesting his daughter and a mother shown beating the same child -- including throwing objects (a television, for instance) at her and kicking her. One fight in particular is shockingly graphic. A man is shown unbuckling his belt and forcing himself sexually on a child.

Despite its many painful, cruel scenes and characters, the ultimate takeaway from this powerful drama is that no matter how persistently someone attempts to break you down, you are special.

Some mentions of products in the context of dream sequences.

Some references to drug abuse, though nothing is shown.