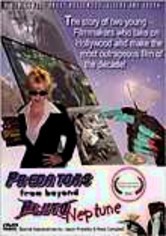 1997 NR 1h 15m DVD
This cheeky yet engaging low-budget schlock follows aliens who land in Hollywood and succumb to the hedonistic allure of Tinseltown. Although the formula of this wacky film is not new, there are plenty of yuks to be had. Television heartthrobs Jason Priestly and Neve Campbell appear as themselves in a cameo.