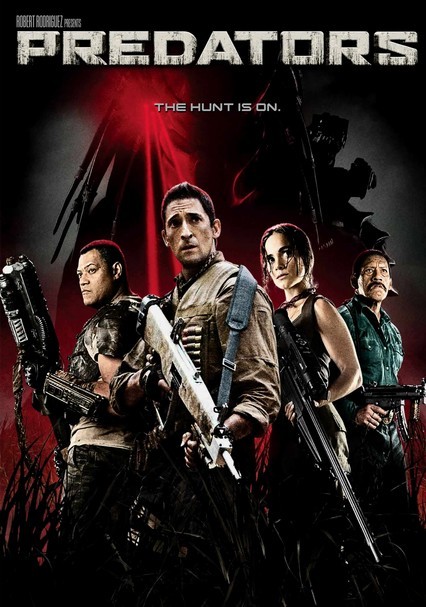 Parents need to know that, like its predecessors (including 1987's Predator with Arnold Schwarzenegger), Predators is a very violent sci-fi action movie. The alien creatures are deadly hunters, and the human fighters who are forced to deal with them are killers and mercenaries in their own right. Expect lots of fantasy violence, including guns, knives, fighting, blood, and gore. Humans and aliens are shot and killed, and there are scary moments when unseen things leap out from the shadows. There's lots of strong language, including "f--k" and "s--t," and in one scene, a character briefly speaks of "doing cocaine" and "raping some bitches" when he gets home.

A little bit of flirting between two characters. Another character makes a comment about a woman's anatomy ("your ass is awesome").

Basically one long battle, the movie is heavy on fantasy violence, with lots of guns and ammo, ranging from pistols to huge, rapid-fire automatic weapons. Some characters also carry and use knives. Characters are shot, with spattering blood. The predators are beheaded, with lots of (green) blood and gore. Alien "dogs" are shot and killed. Scary moments include things jumping out from the shadows. One male character talks about raping women.

Ultimately, the movie's story brings together the worst of humanity and puts them in a violent hunting situation. Even though it also addresses the question of what it means to be "alive" versus what it means to be "human," even that issue is muddled -- It's possible for the characters to stay alive by doing terrible things, so where do you draw the line? That said, some of the characters do learn to survive by relying on one another, working together, and empathizing with one another.

No onscreen drugs, but one character talks about how he wants to "do so much cocaine" when he gets home.