Prehistoric America: A Journey Through the Ice Age and Beyond 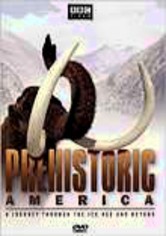 Prehistoric America: A Journey Through the Ice Age and Beyond

2003 NR 2 discs
Travel back in time 14,000 years to imagine North America before man's existence. This documentary, which originally aired on the BBC, compiles historical data and scientific theory and offers realistic views of prehistoric beasts such as the woolly mammoth and the saber-toothed tiger via stunning computer animation technology. This unique look at the past offers a fascinating glimpse into a world that has captured imaginations.