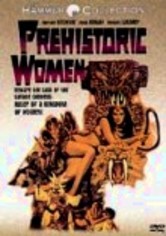 1967 NR 1h 31m DVD
While on safari in Africa, big game hunter David Marchant (Michael Latimer) is captured by a hostile tribe and taken to a hidden temple. When a lightning bolt splits the temple wall, he enters a prehistoric world. There he meets Saria (Edna Ronay), who is one of several fair-haired tribeswomen oppressed by a rival group of dark-haired, man-hating vixens led by the evil Queen Kari (Martine Beswick). Michael Carreras directs this campy classic.