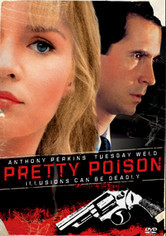 1968 NR 1h 29m DVD
Having played crazy to perfection in Psycho (1960), Anthony Perkins puts the nail in his typecasting coffin with his portrayal of just-released-from-the-loony-bin Dennis Pitt in this blackly comedic thriller. Posing as a secret agent, Pitt begins life anew in a tiny town and takes up with straight-A student Sue Ann Stepanek (Tuesday Weld). Each proves to be more than the other's match in this little-known gem from director Noel Black.