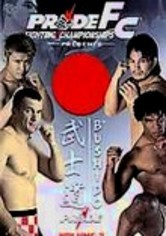 2002 NR 2h 0m DVD
This third round of the Bushido event honors the samurai tradition with 12 bouts of gut-busting combat from Japan's Yokohama Arena in 2002, featuring master competitors such as Takanori Gomi and Ryan Gracie. The Pride Fighting Championships combine several martial arts forms -- judo, karate, jujitsu, kickboxing and wrestling -- into an extreme style of fighting where anything (and any kind of punch) goes.