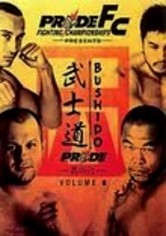 2005 NR 2h 0m DVD
Hand-to-hand combat doesn't get any more intense than in the battles that go on at Japan's Pride Fighting Championships, the country's premier mixed martial arts event. In the sixth annual Bushido competition, held in April 2005 at Yokohama Arena, top fighters such as Fedor Emelianenko, Ikuhisa "the Punk" Minowa and Ricardo "the Mutant" Morais face off in 11 no-holds-barred bouts involving everything from karate to kickboxing.