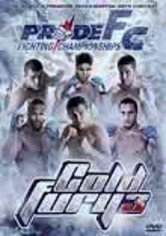 2002 NR 2h 42m DVD
It's kickboxer against jiujitsu warrior, judo fighter against wrestler in this mixed martial arts tournament featuring elite fighters from around the globe showing off their best fight moves. The competition features fan favorites battling it out, including Kevin Randleman vs. Murila Rua, Antonio Rodrigo Nogueira vs. Dan Henderson, and Alistair Overeem vs. Bazigit Atajev, plus many other dramatic matches between world-class fighters.