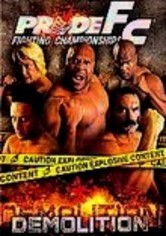 2002 NR 3h 0m DVD
Filmed at Japan's Saitama Super Arena in 2002, this event presents eight matches in which top fighters such as Don Frye and Gary Goodridge grapple in no-holds-barred bouts of vicious action. Combining several martial arts forms -- including judo, karate, jujitsu, kickboxing and wrestling -- the Pride Fighting Championships showcase an extreme style of fighting where anything (and any kind of punch) goes.