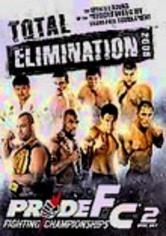 2005 NR 2 discs
Recorded at Japan's Osaka Dome in 2005, this video of gut-crunching action features eight matches with such top fighters as Wanderlei Silva, Quinton Jackson and Kazushi Sakuraba going for broke. The Pride Fighting Championships combine several martial arts forms -- judo, karate, jujitsu, kickboxing and wrestling -- into an extreme style of fighting where anything (and any kind of punch) goes.