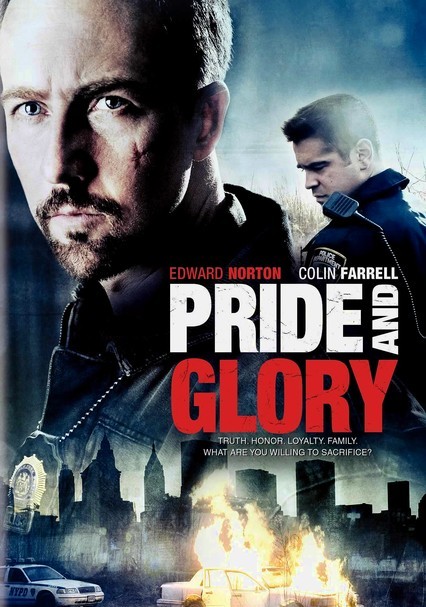 2007 R 2h 10m Blu-ray / DVD
A corruption scandal fractures a family of New York City cops when detective Ray Tierney is tasked with investigating a police precinct run by his older brother. As if that weren't enough, Ray's fellow officer and friend might be dirty, too.

Parents need to know that this police drama tackles mature themes that aren't likely to appeal to younger viewers. Older teens familiar with stars Colin Farrell and Edward Norton may be interested, but this is definitely a parents'-night-out pick. There's hard-R language (including "f--k" and its derivatives) and realistic violence that includes multiple shoot-outs and execution-style murders, a suicide, a baby's life put in jeopardy, and a substantial amount of blood. The sex is limited to married couples kissing and embracing and one quick glimpse of a moaning drug dealer and his girlfriend. Drugs, cigarettes, and alcohol are prevalent.

Couples kiss and embrace; a drug dealer seems to have sex with his girlfriend in front of other people.

Violence is realistic and bloody. Dead bodies are shown lying in pools of blood; people are shot execution style; blood splatter is visible on windows and on the ground; a character commits suicide by shooting himself; two characters have a bloody fist fight; someone is beaten to death; a character threatens to disfigure/kill an infant; and more.

Strong and frequent language, most notably "f--k" and its derivatives. Other frequently used words include "a--hole," "bitch," and "s--t." Spanish speakers should be aware that there are also plenty of unsubtitled vulgarities in scenes featuring the gangsters.

The film's main themes revolve around moral ambiguity, criminal justice, family loyalty, and greed. All of the gangsters portrayed in the movie are Hispanic, while nearly all of the cops are white, but this isn't inaccurate considering the New York neighborhood where the action takes place. A cop calls Spanish "that monkey language."

Drug dealing is a major part of the story, so there are a couple of quick glimpses of characters using drugs; several characters smoke and drink heavily in bars or elsewhere; one man is portrayed as a borderline alcoholic.