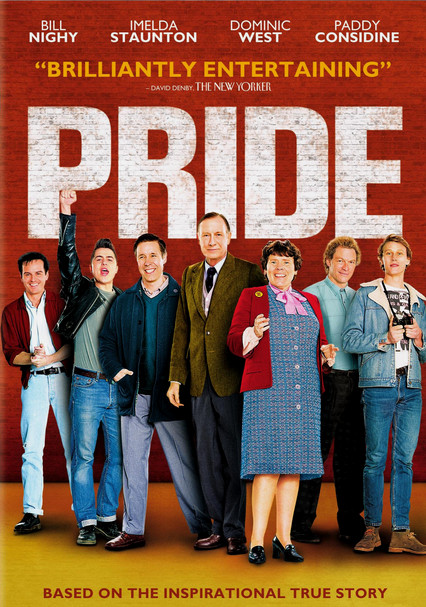 2014 R 2h 0m Blu-ray / DVD
In an unlikely alliance, striking Welsh mineworkers draw support from a coalition of gay and lesbian activists who solicit donations to help tide over the miners' families during the 1984 standoff with Prime Minister Margaret Thatcher's government.

Parents need to know that Pride is a feel-good fact-based dramedy about a group of British gay and lesbian activists who supported the National Union of Mineworkers during the latter group's legendary year-long strike in 1984-1985. Since it's based on historical events, the movie will definitely inform teens about issues they probably didn't know much about, and it will reinforce the idea that successful sociopolitical campaigns and movements require alliances between different groups. There's some strong language ("f--k," "s--t," and more), sexual innuendo (including a shot of straight women joking about a sex toy and nudie magazine they find in a gay couple's bedroom), passionate kissing (both opposite-sex and same-sex, though mostly the latter), a hate crime beating of a gay character, and pushing and shoving between police and the striking miners. Adults also drink and smoke both cigarettes and marijuana on occasion. The movie's politics, particularly when it comes to the pivotal issues of gay rights and labor rights, are pro-Labour Party and anti-Margaret Thatcher.

Couples kiss and dance and are shown cuddling in bed together, but there's no actual sex in the movie. Women find a sex toy and a pornographic magazine in a couple's bedroom and make jokes about both.

People angrily spit at or throw things at the LGSM, and one of the gay characters is beaten up so badly that he has to be hospitalized. The police are physical with the striking miners -- pushing and shoving and arresting protesters. Two men try to make trouble when the LGSM visits their town, but two other men grab them and threaten to hurt them if they lay a hand on the LGSM members.

The film embraces the ideas that there's strength in numbers and that it's important to support not just those who share your background and beliefs but also anyone else who could use your support. The movie encourages young adults to be honest about who they are and stresses how joining a cause can change your life.

Adults (everyone is over 21 except for Joe, who's 20) are shown drinking (mostly pints of beer), and in a couple of scenes they smoke marijuana.