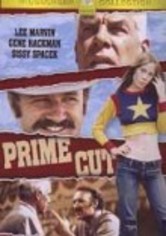 1972 R 1h 26m DVD
Chicago wise guy Nick (Lee Marvin) travels to Kansas City to investigate the disappearance of one of his acquaintances. There, he meets mob boss "Mary Ann" (Gene Hackman), and also happens upon a group of young women who have been drugged, stripped and are being held hostage. One of them, Poppy (Sissy Spacek), wants payback ... at Mary Ann's expense, of course. Michael Ritchie directs.