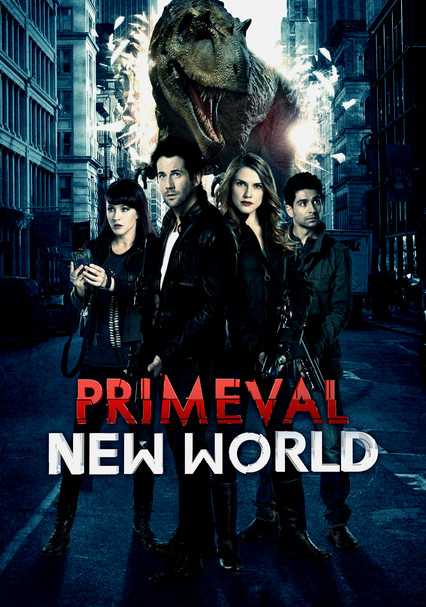 2012 NR 1 season
When dinosaurs begin to appear in modern-day Vancouver, a team of experts gather to locate the predators and track them down before they unleash their prehistoric fury on an unsuspecting public.

When prehistoric creatures start finding their way onto the streets of Vancouver, a team tracks the predators and determines how they crossed over. Led by inventor Evan Cross, the group races to find the beasts before they reach the public.

Parents need to know that Primeval: New World is a drama featuring relatively realistic CGI dinosaurs looming over, menacing, chasing and attacking people, including young children. Victims may be killed in attacks, and though deaths happen offscreen we hear ripping noises and growls and then later see gory dead bodies with injuries like severed arms and ripped-open innards. There is some mild cursing and references to drinking. Cast members we've grown sympathetic towards may be killed suddenly, and the ever-present threat of dinosaur attack may be too stressful for young viewers. Teens are probably old enough to withstand the fright and gore and may enjoy the monster-movie aspect of the show, but parents will be turned off by the stock characters and silly dialogue.

All major cast members are young, cute, and single so expect flirting and dating.

Helpless humans, including young children, are menaced and chased by giant, somewhat realistic dinosaurs. Viewers will see dead bodies, many with gory injuries such as ripped off limbs or torn-open chest cavities, which the camera lingers over.

Some enthusiastic cursing ("Let's kick prehistoric ass!") as well as angry epithets ("What the hell are you doing in here?").

Some references to drinking: "I need a drink" and "I owe you a beer."