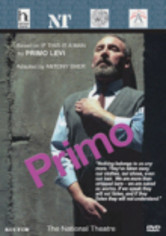 2004 NR 1h 50m DVD
Adapted from Primo Levi's harrowing first-person account of the year he spent in Auschwitz (&NFiIf This Is a Man&NFi_;), Antony Sher's one-man performance became the most sought-after show in London when it opened in 2004. Recorded at the Hampstead Theatre just one year later, this production directed by Richard Wilson captures the drama of one man's survival during one of the darkest periods in human history.