Primus: Blame It on the Fish 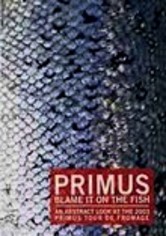 Primus: Blame It on the Fish

2003 NR 1h 10m DVD
A surreal observation on Primus's 2003 reunion tour, "Tour de Fromage," this abstract work exceeds the boundaries of ordinary concert films with mind-bending visuals, ambitious performances and a futuristic documentary. Playing favorites such as "Mr. Krinkle," "Over the Electric Grapevine" and "Jerry Was a Racecar Driver," band members Les Claypool, Larry LaLonde and Tim Alexander are in top form, showing no signs of their seven-year break.