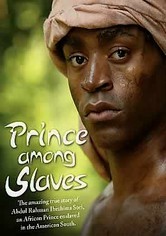 2007 NR 1h 0m DVD
Abdul Rahman, an African prince who was sold into slavery, spent four decades in servitude before an amazing coincidence took him to the White House to meet President John Quincy Adams, where he was granted his freedom. Mos Def narrates this PBS documentary that includes reenactments of scenes from Rahman's life and interviews with historians who discuss the conditions faced by slaves in early America.