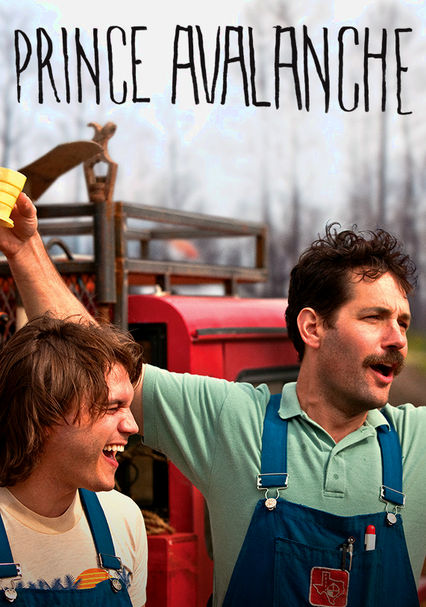 2013 R 1h 34m Blu-ray / DVD
While repainting traffic lines along a burnt-out stretch of rural highway, a mismatched pair -- straightlaced Alvin and his girlfriend's harebrained brother, Lance -- form an unlikely bond that builds upon their differences.

Parents need to know that Prince Avalanche is an introspective look at two very real characters spending a summer alone together repairing a remote road that was damaged in a forest fire. Alvin (Paul Rudd) is arrogant and irritating, and he clearly feels superior to his partner, Lance (Emile Hirsh), whose main goal is meeting girls during his weekends in town. Expect some crude and crass talk about women and sex, a scene of implied masturbation (under sheets), some swearing ("p---y" is the worst of it), a few scenes with smoking, and one long sequence in which the main characters spend an afternoon getting sloppy drunk.

Two men get into a contentious argument that leads to pushing and shoving.

Spending time alone to "find yourself" sometimes means that your worst habits become more ingrained. Alvin tries to better himself by communing solo in the woods, but he doesn't start to grow until he starts to see himself through the eyes of his coworker, Lance.

A few scenes show people smoking cigarettes and cigars, as well as drinking beer and some harder liquor. Two grown men get pretty wasted and spend an afternoon alone in the woods acting quite silly. One guy talks about having a stash of prescription medication.