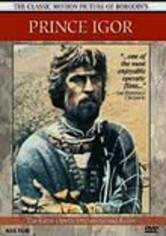 1969 NR 1h 49m DVD
Prince Igor, the Russian leader who defended his Ukrainian homeland against invasion during the 12th century, is the protagonist of this opera by Alexander Borodin that features numerous well-known melodies. Filmed on location where the story takes place, this acclaimed Kirov Opera, Orchestra and Ballet performance stars Boris Khmelnitsky as Prince Igor (sung by Vladimir Kinyaev) and Nelli Pshennaya as Yaroslava (sung by Tamara Milashkina).